Dieter-Ruckhaberle-Förderpreis awarded for the 2nd time
Berlin, 1st of July, 2020

Initiated in 2019 by Künstlerhof Frohnau and the Public Art Council Berlin-Reinickendorf, the Dieter-Ruckhaberle-Förderpreis honors the life and work of artist, curator and cultural manager Dieter Ruckhaberle. The prize consists of a two-months artist residency at Künstlerhof Frohnau, a production budget of 2.000 €, and an exhibition or event in Berlin-Reinickendorf.

The jury awarded the 2nd Dieter-Ruckhaberle-Förderpreis to the artist Annette Frick, who was born in 1957 in Bonn (Germany). Over the last three decades Frick has produced an impressive body of work in which she has been exploring the photographic image as a means to not only document but also to think through and perform alternative ways of living and working along the social and cultural margins.  The protagonists of Frick’s photographs and print works are the “masks of identity” of Berlin´s queer culture and its changing architecture. Her series of portraits and urban studies reflect the conflicts and changes around the politics of representation and identity within recent history, and open up spaces of poetic, performative and political imagination through engagement, complicity and proximity. During her residency period Annette Frick will work together with Wilhelm Hein, Filipa Cordeiro, Oana Limban and other artists on a new issue of her magazine series “Jenseits der Trampelpfade“, which she publishes since 1992 with Wilhelm Hein. 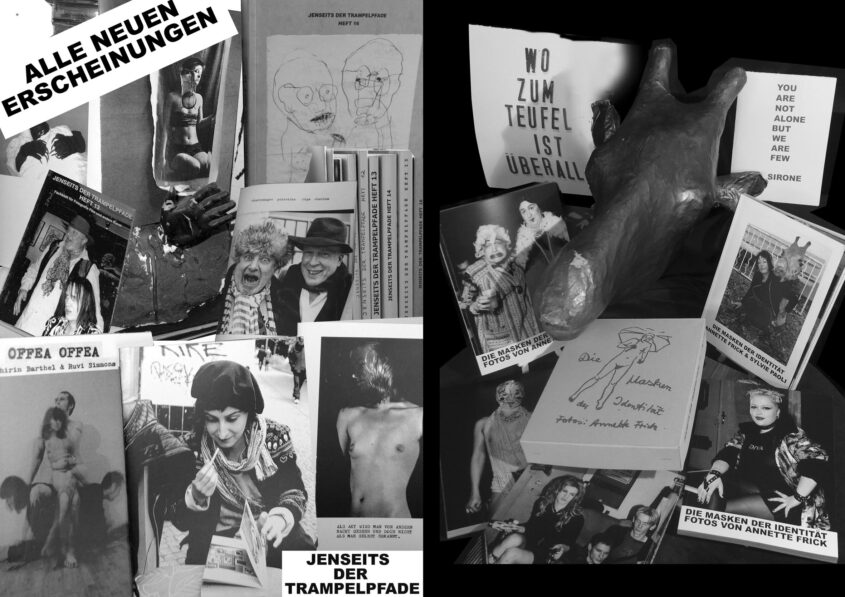 About the Award
The Dieter-Ruckhaberle-award remembers and honors the life and work of artist, curator and cultural politician Dieter Ruckhaberle. It is open to all visual artists whose work or wider professional practice is concerned with political, social or ecological questions. Since the 1960s Ruckhaberle was a leading figure of West-Berlin’s cultural scene. He tirelessly promoted and worked towards better working conditions for artists in Germany, always convinced that artistic freedom could only be guaranteed by an absence of economic pressure. Ruckhaberle initiated the IG Medien, a union for media related professions, and the Künstlersozialkasse (KSK), a subsidized health insurance for artists. He co-founded various art institutions such as nGbK and the Staatliche Kunsthalle, as whose director he served for many years. As an artist Ruckhaberle created an extensive and multifaceted body of work, ranging between painting and sculpture, both abstract and figuratively, in search of new poetic forms and positions of critical contemporaneity. He passed away in May 2018 at his last major project: the Künstlerhof Frohnau, an artist “village” on the Northern outskirts of Berlin, which offers affordable studio spaces for artists since 1998.